Pia Camil takes inspiration from urban and industrial forms, reinterpreting them as handmade objects that recode the artist’s relationship to the city and notions of public space. The Mexico City-based artist began by photographing her native city, particularly the billboards that compose the visual fabric of the environment. From these hand-colored photographs, she moved toward textile-based and sculptural works, reducing the urban images to colors and geometric forms. The textile-based pieces approximate the architecture of the city, transforming the mass-produced, industrial landscape into a meticulous, handmade corollary. These works build on the legacy of Hélio Oiticica and Lygia Clark, as they are wearable and meant to engender new relationships between the artist, audience, and artwork. 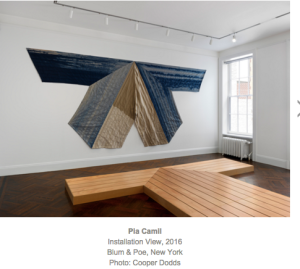 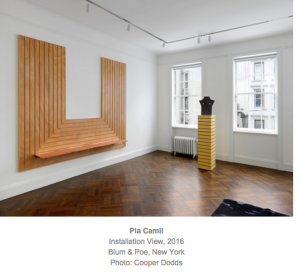 Slats, skins and shop fittings is inspired by the display structures of low-end downtown Mexico City commercial spaces. Camil appropriates the material of slat paneling found in dollar stores and department stores to create wall works from which she traces an aesthetic thread to the stylistic traditions of American Minimalism. Camil specifically channels Frank Stella’s Copper Paintings (1960-61), a series that presented his first use of tape to create repetitive striped patterns, a mechanical appearance inevitably pointing to the idea of painting as object. As Michael Fried said in Art and Objecthood in 1967 of Stella’s work, “It aspires, not to defeat or suspend its own objecthood, but on the contrary to discover and project objecthood as such.”

Camil takes Stella’s paintings as a point of departure and imbues an iconic image with contemporary social and cultural implications. The panels, which resemble Stella’s shapes, are made of plywood slats – a material that is mass-produced because of its affordability and most often used for merchandising systems of display. In Slats, skins and shop fittings, Camil employs her panel sculptures as structures for presenting textile cloaks hanging from copper hooks. This series of cloaks is made of reclaimed fabrics sourced from factory castoffs, with unintended dye patterns producing a painterly effect that Camil describes as mechanical abstract expressionism, the counterpart to theCopper Paintings series. Her Bust Masks draw from Carl Jung’s notion of the persona, a metaphorical mask an individual wears in relation to a society. Camil integrates the aesthetics of jewelry display busts (modelled after the female body) and primitive masks used in ritual performances to render a physical manifestation of the persona; a dual reference to the role that that the public plays in activating her art, and the politics of consumerism and commerce. Both her cloak and mask series merge this endeavor to explore commercial aesthetics with a long-developed interest in performance and female identity. Reminiscent of Lygia Clark or Helio Oitica’s wearable art pieces known as “habitable paintings,” Slats, skins and shop fittings investigates the intersection of art and life and its ability to inspire change.

Pia Camil (b. 1980) lives and works in Mexico City. She has a BFA from the Rhode Island School of Design and an MFA from the Slade School of Fine Art, London. Her work has been exhibited internationally, with recent solo-exhibitions including A Pot for a Latch, New Museum, New York (2016); Skins, Contemporary Arts Center, Cincinnati (2015);The Little Dog Laughed, Blum & Poe, Los Angeles (2014); and Cuadrado Negro, Basque Museum Centre for Contemporary Art, Vitoria-Gasteiz, Spain (2013).