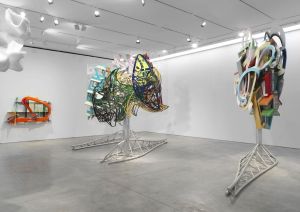 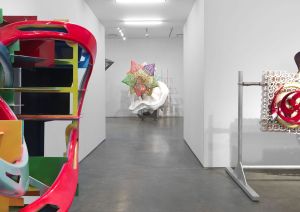 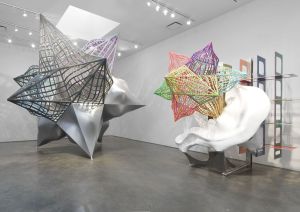 Marianne Boesky Gallery presents an exhibition of recent sculptures by renowned artist Frank Stella. Ranging from the monumental to the intimately-scaled, the featured sculptures capture Stella’s ongoing exploration of the spatial relationships between abstract and geometric forms and the ways in which they behave in and engage with physical space. In these newest works, Stella combines interlocking grids with more fluid and organic lines, creating a dynamic interplay between minimalist and gestural visual vocabularies. Frank Stella: Recent Work will be on view from April 25 through June 22 across both of the gallery’s Chelsea locations at 509 and 507 W. 24th Street.

Stella’s decades-long career is synonymous with artistic innovation. From his early Black Paintings, which dramatically shifted the dialogues on abstract art, to his use of both the formal qualities of painting and sculpture to produce his Polish Village series in the 1970s, and through to his use of computer modeling and 3D printing, from the 1990s and into the present, Stella has continued to push compositional boundaries. His experimentation with and use of line, color, and form have resulted in strikingly different effects—on the canvas and in three dimensions. Stella’s boundless vision has resulted in a new body of work that freshly engages the grid as well as the star and ribbon motifs that have appeared throughout his oeuvre. 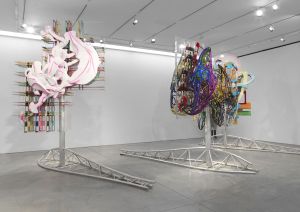 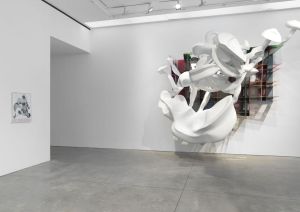 In some works, like Atalanta and Hippomenes (2017), the rigid structure of the grid is broken by the application of large, billowing white forms that seem to weave and expand across the vertical and horizontal planes. Inspired by the ethereal quality of smoke rings—which have long captivated Stella— the abstract form appears weightless despite its grand scale. This sensation is further accentuated by the way the grid is affixed to the wall, giving it a contrasting feel of solidity. In others, such as Leeuwarden II (2017), the fiberglass grid is suspended within a metal frame, with brightly-colored, almost neon, ribbons dramatically swooping in and out of it, imbuing the work with a vivid sense of motion. The juxtaposition of materials, from colored fiberglass to bare steel to PU-foam, adds further texture and depth to the sculptures and contributes to the shifting experience of the work as one changes position and perspective.

The star, which first entered Stella’s visual lexicon in the early 1960s with his Dartmouth Paintings and became increasingly prominent in his work in the 2000s, continues to serve as an important source of inspiration and point of departure. In Jasper’s Split Star (2017), Stella produces the form in monumental scale—the sculpture measuring approximately 18 by 20 by 18 feet. The star’s sides, which are in parts gridded, push in and outward, creating an unexpectedly sinuous form and disrupting our expectations of the rectilinear lines of the grid. In sculptures like Nessus and Dejanira (2017), the star becomes part of a larger constellation of grids and organic forms. Named for figures in Greek mythology, the work is a kind of microcosm of the conceptual inquiries and formal themes that have driven Stella’s practice since the late 1950s. 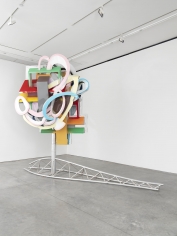 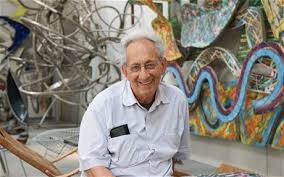 Born in Malden, Massachusetts and based in New York City, Frank Stella (b. 1936) has produced an extraordinary body of work over the past six decades. Since his first solo gallery exhibition at Leo Castelli Gallery in 1960, Stella has exhibited widely throughout the U.S. and abroad. Early in his career, his work was included in a number of significant exhibitions that defined the art in the postwar era, including Sixteen Americans (Museum of Modern Art, New York, 1959), Geometric Abstraction(Whitney Museum of American Art, New York, 1962) The Shaped Canvas (Solomon R. Guggenheim Museum, New York, 1964-65), Systemic Painting (Solomon R. Guggenheim Museum, New York, 1966), Documenta 4 (1968), and Structure of Color (Whitney Museum of American Art, New York, 1971). In 2017, NSU Art Museum, in Fort Lauderdale, Florida, organizedFrank Stella: Experiment and Change, an exhibition that featured 300 works from across Stella’s 60-year career. His work is held in more than 50 public collections, including in the holdings of some of the most preeminent museums in the U.S. Stella’s most recent work uses digital modeling to explore how subtle changes in scale, texture, color, and material can affect our perception and experience of an object.