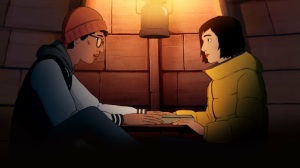 Based on Guillaume Laurant’s novel Happy Hand, I Lost My Body is the first animated film to win the Nespresso Grand Prize awarded by the jury of the International Critics Week at the Cannes Film Festival. A beautiful, haunting film that uplifts the human spirit at the end.

State of the Arts NYC has supported Animation First for three years. A favorite festival of this radio show. New Yorkers and Americans overall, should watch more French feature length and short films from these innovative artists.

Movie Plot
A severed hand escapes the lab it is being held in and begins a harrowing journey back to its body, belonging to a young man, Naoufel. As a boy, Naoufel aspired to be both a pianist and an astronaut, and enjoyed recording his day-to-day life on a tape recorder. However, after he loses both of his parents in a car accident, he is forced to live with his emotionally distant uncle and his crude cousin. Naoufel skates by as a pizza deliveryman. During one delivery, Naoufel delivers a late pizza to a young woman, Gabrielle, at her apartment. Though they never see each other, they have a long conversation, and Naoufel quickly becomes infatuated with her. He changes his life by working with her uncle in his wood shop. In the middle of cutting wood on a jigsaw, Naoufel is distracted by a fly. He recalls his father’s lessons on catching a fly – to go at it from the side where the fly isn’t expecting you. Intent on capturing the fly, Naoufel gets his watch caught in the jigsaw, which pulls in his hand and severs it. Eventually, the severed hand reaches Naoufel while he is asleep, but it is unable to reattach itself to his arm. Naoufel, depressed and hopeless, revisits his old tape recorder, which still has recordings of his parents — including the car ride before the accident. Gigi attempts to talk to him, but Naoufel doesn’t respond. Gabrielle worries that he may have committed suicide, and instead learns he had successfully leaped off the ledge onto the crane as he had once hypothesized. Naoufel lies in the crane and begins smiling to himself as he looks out at the city. His severed hand retreats into the snow. Naoufel doesn’t need the hand anymore.

History of French animation is one of the longest in the world, as France has created some of the earliest animated films dating back to the late 19th century, and invented many of the foundational technologies of early animation.

The first pictured movie was from Frenchman Émile Reynaud, who created the praxinoscope, an advanced successor to the zoetrope that could project animated films up to 16 frames long, and films of about 500~600 pictures, projected on its own Théâtre Optique at Musée Grévin in Paris, France, on 28 October 1892.

Émile Cohl created what is most likely the first real animated cartoon to be drawn on paper, Fantasmagorie in 1908. The film featured many morphing figures. He is also thought to have pioneered puppet animation in 1910, pixilation in 1911 and to have started the first animated series in 1916 with La journée de Flambeau (see below).

So, what is the “je ne sais quoi” propelling the French animation industry? The first factor is government intervention and incentives. French public authorities have long invested in animated television series due to their international nature, the ease of dubbing and relationship with technology.

And it’s not just government subsidies that are moving France’s industry forward. Investment in animation education is key; four of the top 10 institutions are in Gaul. The talent produced by the top school in the world, Paris’ Gobelins, has become so favoured by American studios like Disney and DreamWorks that it launched an English-language MA in character animation and animated filmmaking in 2017.