Each exhibition is named after a work by the artist. Dial World, Part I: The Tiger that Flew Over New York City takes place on 88 Eldridge Street, and presents eight major assemblages by the artist, showing the power and range of Dial’s achievement.

The Tiger that Flew Over New York City was inspired by Dial’s first trip to New York City. He describes the city as a radiant agglomeration of gleaming white towers, below which are clustered the brown tenements of the oppressed. Above, in the corner, flying but also perhaps trapped, is an image of Dial himself as the Tiger: the image of struggle—the struggle for life, liberation, and justice, an allegorical self-portrait emblem throughout Dial’s work. Noteworthy as well in this work is Dial’s use of carpet: working, as did (and do) so many of his peers with found and discarded material, with the refuse of society, he enacts a double transmutation: expanding the two-dimensional window of the picture-plane into a living sculptural surface; redeeming what has been trampled on and letting it rise again and shine.

Dial-as-Tiger; Dial’s relationship to New York City, Dial’s desire, through his art, to map and explore the world in order to then redeem it: these are the themes of Dial World: Part I. In Everybody Loves the United States, inspired by Dial’s visit to the still-smoldering site of Ground Zero, he conjures a sardonic vision of patriotic violence, of fallen and falling bodies, outlined in the colors of the American flag; these are the frozen victims of an unrelenting and perpetual crime. A similarly apocalyptic mode prevails in Meat, in which Dial laments both the sexual degradation of women’s bodies and the destruction of all bodies by soldiers and police, abroad and at home. Again, this macabre spectacle takes place under the aegis of the flag, capturing the dualities of dominance and subservience, obedience and dissidence.

In the Making of Our Oldest Things celebrates creative traditions—specifically that of the quilters of Gee’s Bend—and pays homage to the community of women that raised Dial and previous generations of his family in Alabama. The assemblage is structured like a quilt, built of fabric; it is also designed like a map, as if the small farms of the rural south are seen from above (by a flying Tiger, perhaps…) An analogous spirit of grace and homage is present in In Honor, which likewise evokes the spirit of Dial’s female forbears and the quiltmakers of Gee’s Bend, this time seen as powerful presences hovering over a grassy landscape, crowned with a jagged glimmer of sky. And the “mapping” spirit, at once practical and questing, is clearly present in “Patterns,” which functions as a potent manifesto of art’s purpose for Dial: to use knowledge as a tool of action and understanding, action and liberation.​

Ready to travel this road described by the artist, is, of course, the Tiger, the maker of the map and the hero of this redemptive journey. The Tiger is always also the Trickster, re-writing history and redeeming it, turning refuse and oppression into brilliance and possibility. This is the theme of All the Cats in Town, a joyous representation of communal exuberance. Finally, in the late, supremely shamanic Bone Dry, Dial enacts an even more literal transmutation, the Trickster- Tiger’s last act, claiming the powers of a magician, suspending the jawbone of a dead beast, talisman-like, on a jagged modernist field.

The second iteration of ​Dial World, Dial World, Part II: Stars of Everything, will open October 30 at the gallery’s new 12th street location with a group show celebrating Thornton Dial. 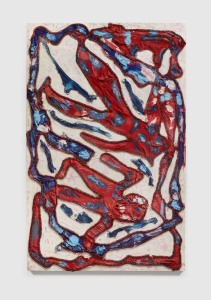