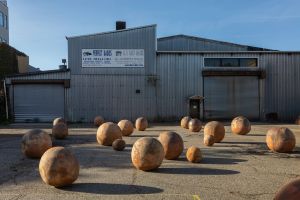 speaks to, in artist Bosco Sodi’s words, “silence, contemplation and the passing of time—the small things in life and our relationship with the earth.” The installation consists of large-scale clay spheres made from local clay fired in the artist’s studio in Oaxaca, Mexico, which made the long journey by road across the Mexico-US border to Red Hook. A longtime resident of the neighborhood—itself named after the tone of its own clay soil—Sodi is known for his use of raw and organic materials to create textured paintings and objects. 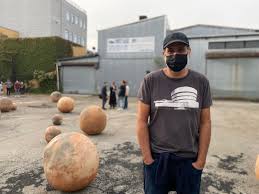 Sodi’s ongoing dialogue with nature and landscape, shaped by his interests in Japanese aesthetics and Abstract Expression, puts himself in the lineage of both Arte Povera and Land Art—two post-war movements which emphasized, respectively, radically simple materials and an integral relationship between art and earth. As Spanish author Juan Manuel Bonet remarked in the artist’s 2020 eponymous monograph, his three dimensional works reconcile an interest in minimalism with the practices of Mexican heritage. On this topic, curator Dakin Hart further writes: “At his place in Oaxaca, Sodi hand forms large geometric sculptures from clay and fires them in a makeshift kiln on the beach. Cuboids in different formats recall the scale and how-did-they-do-that-craft of cyclopean architecture across the ancient world. While spheroids, each formed by eye in a landscape of unbelievable things, might be the petrified remnants—or organic vanguard—of a Jurassic invasion. The past seeding itself into the present, a starting point for nature’s revenge.”

Speaking of the transformation of Red Hook’s open spaces in the spring and summer, Hart calls lots like this one “ad hoc sites in a weed jungle experiment for the re-greening of New York,” saying, “This one would be an ideal place to transplant Sodi’s clay pods, to see what else might grow here.” Perfect Bodies will furthermore act as a locus for a number of community-oriented programs, including adult educational workshops and other activations, and follow the artist’s 2014 solo exhibition The Last Day at Pioneer Works.

Bosco Sodi (b. 1971, México City) invokes an emotive power from the essential simplicity of his materials and the vivid pigments he sources. Sodi has described his creative process as a “controlled chaos” that makes “something that is completely unrepeatable.” Focusing on material exploration, the creative gesture, and the spiritual connection between the artist and his work, Sodi seeks to transcend conceptual barriers. His works become memories and relics symbolic of the artist’s conversation with the raw material that brought them into creation.

Sodi is also the founder of Fundación Casa Wabi, an art center in Oaxaca, México dedicated to promoting the exchange of ideas between international artists of different disciplines. Designed by Japanese architect Tadao Ando, the foundation also develops opportunities for art education with local communities.

Dakin Hart is Senior Curator at The Isamu Noguchi Foundation and Garden Museum (Long Island City, NY), where he oversees the Museum’s exhibitions, collections, Catalogue Raisonné, Archives, and public programming, and has the daily good fortune of collaborating with Isamu Noguchi in absentia.