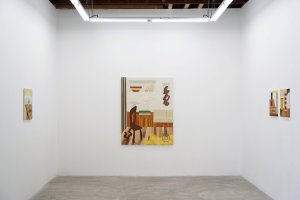 CARVALHO PARK announces the first exhibition of Paris-based artist, designer and architect, Garance Vallée, in the United States. Portrait de Famille, a solo exhibition, features a suite of paintings, drawings and sculptures – of Vallée’s distinct and indelible language – opening on February 13. Portrait de Famille, will be on view at Carvalho Park in Brooklyn until March 20.

Vallée’s scenes are an invitation into her singular vision. Of an articulated Surrealist doctrine, these interior spaces are suspended between representation and non, volume and silhouette, tangibility and fiction, inquiry and play. These are inhabitable, contemplative spaces, filled with precise forms. At once environment and still life, Vallée’s scenes tilt towards abstraction as forms oscillate between two and three-dimensionality. Vallée’s objects tempt us to pluck them from the picture – from a place we are beckoned to project ourselves. An inherent intimacy is present. Painted during the global pandemic, when Gaston Bachelard’s words acutely defined our circumstances, la maison est notre coin du monde – here, we are unequivocally in Vallée’s world.

As a total, Vallée’s work is distinguished by a remarkable consistency within plurality, from painting, drawing and sculpture, to architecture and scenography, a distinct aesthetic language permeates the range of her artistic production. An earthbound palette further fuses this identity – of ochre, beige, off-white – while the rectilinear language of Antiquity intermingles with Modernist sensibilities and the curves of the human form. In the center of the gallery is an assembly of painted wooden sculptures, titled as Totems. Standing figure-like among us, as a gathering from the surrounding scenes, together sculpture and painting with absorbing synthesis, veer towards installation.

“Inhabiting space, whether it means the space of the drawing, painting or the installation of sculpture, is at the forefront of this work. I like the notion of building for humankind, that bodies can enter and experience the spaces of the work. I like the notion of gesture, to make it present and traceable in each work. Spaces live by the presence of human experiences. Often my drawings of accumulated forms are true to scale, selections of objects we hold in our hands, into which we load our inner experiences.

We accumulate these objects, in which we put so much of our innermost being, to the extent that the objects form totems that rise as meaningful, human-like figures. They fill space with their presence, while taking us elsewhere, towards a memory, a dream, a utopia – they set us free. In this work, some objects appear as simple contours, other volumes take the form of a solid, thus playing with trompe-l’oeil and digital architectural representation, occupying a space between 3-dimensional rendering and 2-dimensional drawing. The objects are detached from their primary function – they are presented as a kind of family portrait, charged as personal symbols.

The house appears as a maternal figure, bringing us back to our first environment of the mother’s womb, the first prehistoric cave, a rudimentary space. This work invokes these primary habitats, almost troglodyte, but released from an architectural codification. This series of paintings show interior views of the house, intimate spaces. The domain of public space and architecture has been likened to the masculine figure in history as women were reduced to the domestic space. Virginia Woolf wrote in A Room of One’s Own (1929), ‘Women have sat indoors all these millions of years, so that by this time the very walls are permeated by their creative force.’

With our present experiences of lockdowns, the house has become a symbol of isolation as well as a source of self-reinvention. The scenes I portray appear in real proportion, yet the perspectives and volumes are oftentimes distorted to make light of the codes of architectural representation. This endows a utopic freedom of the space. These places represented do not exist, yet painting it, I believe that I am building it, I give it a reality, a materiality and in a certain way, I inhabit it.”

Garance Vallée (b. 1993, Paris, France) was initiated into art in the studio of her father, French painter Kriki. She holds a Masters in Architecture, with a specialization in scenography, from The École Nationale Supérieure d’Architecture de Paris-La Villette. A pivotal introduction with Italian architect Ada Tolla in New York set her on a solo direction to formulate her own stylistic vocabulary, regardless of medium. In 2018, Milanese press secretary, Martina Gamboni invited Vallée to create an immersive installation for Milan Design Week. Titled Terra, it was this dreamlike landscape that catapulted Vallée to international recognition. Her work has been exhibited at Amelie Maison d’Art in Paris, Swing Design Gallery in Benevento, Italy, Artemate Gallery, Paris, and the Fondation Lafayette, Paris, and as installations at international design fairs. Vallée has collaborated with Maison Martin Margiela, Missoni group, Vogue Living, Nike, Estée Lauder at Le Bon Marché Paris, Astéré of ELITIS, Audemars Piguet, Atelier 27, Say Hi To, Man/Woman, among others. Press includes AD magazine, Milk Decoration, Vogue, Elle Decoration, Sight Unseen and Madame FIGARO.