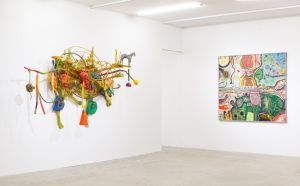 Roy De Forest’s freewheeling vision, treasured for its combination of dots, dogs, and fantastical voyages, made him a pillar of Northern California’s artistic community for more than fifty years. Born in 1930 to migrant farmers in North Platte, Nebraska, De Forest and his family fled the dust bowl for Washington State, where he grew up on the family farm in the lush Yakima Valley, surrounded by dogs and farm animals. In 1950, De Forest received a scholarship to the California School of Fine Arts (now San Francisco Art Institute), where he studied under Elmer Bischoff and Hassel Smith, artists who encouraged De Forest to challenge the heroism of Abstract Expressionism. De Forest quickly became involved with San Francisco’s nascent Beat community, and supplemented his formal education with seminars, conversations, and exhibitions at venues like the King Ubu and East & West galleries, where he became close with artists Joan Brown, Manuel Neri, Jay DeFeo, Wally Hedrick, Jess, and Deborah Remington, among others. An active participant in the boisterous atmosphere fostered by his teachers and peers, De Forest “developed a kind of opposition to […] quasi-religious attitudes toward painting” and became “skeptical about all the Romanticism and especially the overt conversions people were supposed to go through.” His earliest works feature large skeins of bright color, which he paired with fanciful titles that undercut the heady moralism and spiritual excesses of Abstract Expressionism. 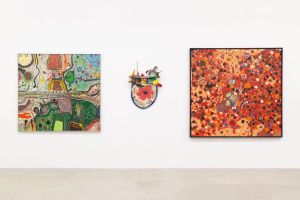 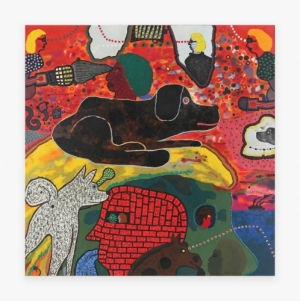 De Forest worked as an art handler at the San Francisco Museum of Art (now SFMoMA), and after an injury sustained when a Herbert Ferber sculpture fell on him, he returned to the Yakima Valley, where he spent two formative years codifying his signature style. He produced dazzling paintings and works on paper, developing a visual vocabulary that recalled his diverse interests, including natural forms like seed pods and protozoa, articles from Scientific American, and beaded tapestries from the indigenous Yakama Nation. He started using acrylic paint, whose adhesive properties he put to use in hybrid, wall-hung constructions of wood and found objects, which incorporated animals and figurative imagery for the first time. His trademark dots—Hershey Kiss like dabs of acrylic squeezed directly from the tube—emerged during this period, and many of his paintings appear to depict aerial views of vast, dotted landscapes, which he described as “more or less what you’d think of when you see a landscape from an airplane.” De Forest returned to California’s burgeoning artistic community in 1960, and mounted a series of successful solo exhibitions at the legendary Dilexi Gallery. In 1965, he joined the faculty at the University of California, Davis, which became a hotbed of creative experimentation. Alongside his colleagues Robert Arneson, Manuel Neri, Wayne Thiebaud, and William T. Wiley, De Forest fostered a renaissance of unconventional artistic production, whose exponents called their movement “Nut Art.” Bound chiefly by their joyous, rampant idiosyncrasies, more than twenty artists eventually exhibited under the banner of Nut Art, including De Forest, Arneson, Clayton Bailey, David Gilhooly, Gladys Nilsson, Jim Nutt, Maija Peeples-Bright, and Karl Wirsum. De Forest’s paintings grew increasingly figurative, featuring his signature menagerie of unusual dogs rendered in a “crazy quilt” style, where pockets of deep space punctuate the picture plane. In 1974, the San Francisco Museum of Art organized a retrospective his work, which traveled to the Whitney Museum of American Art the next year.

Read about Venus Over Manhattan controversy below. 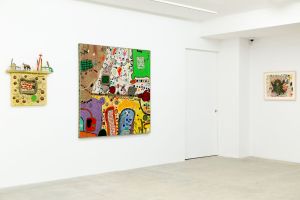